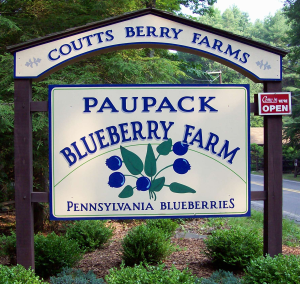 History of the Paupack Blueberry Farm

Our Beginnings
In 1964, Donal & Shirley Coutts purchased 41 ½ acres of land from Mr. Charles T. Oughton, Sr. It included the three fields presently under cultivation. Field One was approximately 4/5 cleared and planted with high bush blueberries. Field Two was planted with blueberries in what is presently sections A, B & C. Field Three had the first 14 rows planted. The remaining sections of fields were grown up in trees, brush, or weeds.

Machinery
Only one piece of machinery was purchased with the farm. That was a Model 40 John Deere cleat track tractor. That same tractor is still owned and used at the farm today.

Blueberries
Most of the berries were picked by hand. Public picking had not yet begun other than by a few locals who knew the farm existed. Pickers for the farm were paid 15 cents per pound and those who kept their blue bounty were charged 15 cents a pound. Berries packaged in one pint pulp baskets sold for 35 cents a pint. To cover the baskets of berries, we used printed cellophane sheets fastened with #14 rubber bands. Once we began “Pick Your Own”, one of us, usually Shirley, would simply wait around for a customer to show up.

Building
The only building with the farm was that portion of the existing packing shed constructed of cinder blocks. It was 24’ x 40’. One half of the building was used for a garage with a dirt floor, the other half for a packing shed.

Shipping Crates
Don built the 12 pint shipping crates entirely from wood. He cut the ends and dividers from ½ inch scrap plywood, sides were each made from two ¼” x 2 inch slats, and the tops and bottoms each consisted of three ¼” x 2” wood slats all fastened with nails. Around 1980, still using wood ends and dividers, we developed a folded, printed, cardboard to form the sides, bottom and top. This we continued to use for approximately 20 years. 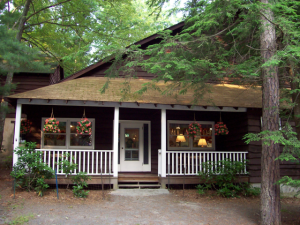 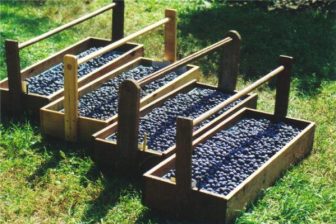 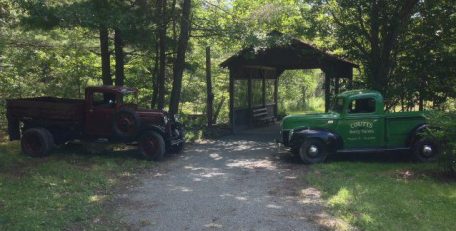 Where We Are Today

Land
Because each of our four children were give a parcel of land off the farm, the remaining property consists of approximately 27 acres.

Drainage
The original drainage consisted of a ditch around the perimeter of Field #2. Soon after purchasing the property, a blasting friend agreed to blast irrigation ditches across the field using black powder. With charges in place, he lit the fuse. The black muck flew a few feet in the air, then settled back down where it came from. Obviously, it didn’t work. Next, after building two 8’ x 8’ pallets, and using a JD 350, John Deere backhoe, Don dug the five drainage ditches across the field. As the tractor rested on one pallet, the other was placed in front in preparation for the next move forward. The two original culverts had collapsed and had to be replaced. The culvert between Field #1 and Field #2 were replaced in 1994 with the covered bridge built using a modified post and beam construction.

Buildings
Sometime around 1976, we built the first large addition on the packing shed. Walter Shoenagel from Greentown, drilled our well approximately 130 ft. deep, and we added a kitchen and two outside bathrooms. At the same time, after pouring a concrete floor, we converted one half the garage into a new pick your own weigh station area. The gift shop was increased, a snack bar was added, and we began selling home made ice cream and fresh baked goods.

About 1980, we purchased the old Camp Brooklyn work shop for $1 from Gumble Brothers, who had purchased the Camp Brooklyn property and wanted all the building removed or demolished. After sectionalizing the building, Don hauled it over to the farm using our 1936 1½ T. Ford flatbed truck. Next, he reconstructed it and used it for a tractor & storage shed. With Ken’s help, we also built a small chemical shed which was moved to its present location. The year of 2000 we added our second large addition, again increasing the kitchen and store size, and installed two inside bathrooms, a walk in freezer and walk in cooler. Our most recent change came from moving our weigh station to a more convenient location, and so come into being the wooden structure near the field’s entrance.

Marketing
Even at 35 cents, it was difficult to sell the berries retail. Customers would not travel clear out to Paupack just to buy berries at that price when the ACME Store in Hawley was selling them “3 for $1.00.” To differentiate from the competition, Shirley decided to process some of our berries into baked goods, particularly muffins. This proved the beginning of a revelation. When customers came in to buy blueberry baked goods, they would also buy a few pints of fresh berries. Today we make muffins, jams, jellies, pies, turnovers, ice cream and much, much more from our delicious berries!

Wholesale
At first we sold wholesale to Pocono Produce in Stroudsburg. Although they took most of the berries we could produce, their price was ridiculously low. Next we sold to Rosenstein’s in Scranton who paid more and wanted all the berries we could produce. Finally, wholesalers from around the area were calling for our berries, but we could not produce them in that quantity. Twelve pint shipping crates are now entirely made of cardboard printed with our logo.

Pick Your Own
Pick your own blueberries starts about July 20th each year and ends around Labor Day. Nearly all the fields are now designated for pick your own. As a result, we find it more and more difficult to provide fresh picked berries for sale to the local stores. Wholesale has become nonexistent because supply just cannot keep pace with demand. The parking lot is filled with cars nearly every day during picking season. In 2007 we increased the parking area for the third time since buying the property. We are dedicated to finding natural ways to increase our crop yield so that we can offer you a bounty of berries throughout the duration of the picking season, time and time again.

Each of you that steps into our fields is a part of our ever-growing history; from the families that have picked here for generations, to our newest additions who are beginning traditions of their own, we welcome you to the Paupack Blueberry Farm.